This is a story I cannot keep to myself. This Kafka-esque tale is better than fiction. It’s straight from the annals of the Twilight Zone and R.L. Stine. It’s surreal and mortifying.

I write this as the roosters are telling all of the other birds how different they are. The crépuscule of the dawn brings hope through my window as I stare straight at the severe pain that awoke me an hour ago.

At 4:10am I awoke with a sharp tingling in my right ear. I was sleeping on that side, so I thought it was a weird inner ear pain from ear wax. The rapid finger jiggle that oft old men do with confidence gave me no relief. The pain was sharp and deep. I felt my right nostril close up in correlation. The pain was coming and going as it so chose. The way my head was tilted or if I was putting pressure on my ear made no discernible difference. The pain seemed to have a life of its own.

I have suffered ear aches as a young swimmer in high school. I know what it’s like to awaken with sharp fire deep in the canal of my hearing. Yesterday, I went swimming in Kealakekua Bay just minutes from my home so I figured maybe it was water build-up deep inside of me wanting to drain.

Perhaps it was an earwax avalanche. I’ve also had those when I was younger and still do every so often. A dry tumbling of orange micro pebbles will cascade down and outward after a sudden angle shift and precise climate causing so. I was hoping it was this or the water-log.

The sounds of the pain were highly correlated as well. There was a rumbling like the ocean. The little hairs in my ear were moving and swaying making a large dull clamoring that sounded off with the pain. The stillness and quiet resulted in no pain at all. I felt this quiet when I did a little suction motion with my hand cupping my ear trying to make a hand-made vacuum to extract the unknown pain-causing substance.

At this point the discomfort was too severe and out of control. I ran to the bathroom within 10 minutes with my smartphone looking up “severe pain rumbling ear” on the internet as I shuffled in the dark. The wifi signal is strong in my home. But at 4:30am, I was getting page-loading errors. The nightmare was getting worse. This lack of internet and loss of information made me stop and really think hard if I was dreaming or not. I had no way of knowing. I had no way of knowing what was going on inside my skull. I needed to not feel alone and I needed to make sure I was not dreaming.

Looking in the mirror in the bathroom, I expected to see blood dripping out. I expected to see an inflamed ear lobe and a throbbing side of my head. It looked normal enough though. At least I felt confident that this was reality and not a dream. The pain continued and the thought of driving to the ER became real.

Then the wifi came back. I got info on tinnitus and ear aches. Nothing was lining up with my symptoms. I got the address of the hospital and looked up their emergency services just to convince myself that it was doable and I should just go to the ER. I could drive myself. I wasn’t sure if it was worth it.

So I started texting my mom and sister three hours ahead of me in California about what I’m experiencing. I didn’t send it because they couldn”t do anything about it and there was no point in worrying family so far away about my health. The pain was back and driving me insane. The feeling of a deep penetration that was not subsiding frightened me. I needed to see what was going on in there, it was too out of control to be just me.

I turned on my phone camera flash and began filming. Filming inside of one’s ear with a cell phone takes more skill than I imagined. I don’t take enough inner ear selfies I suppose. I then review the film and see that I missed the filming of my ear entirely. I keel over again in another bout of suffering, cupping the side of my head knocking it on the side as if water was stuck in there. Silence and no pain for a few seconds, so I try filming again.

This time I stuck to it and let the pain continue even though it was nearly debilitating. I filmed on through the pain. It was my mission to get a glimpse into this cave of mine and see what it was.

The light was shining bright into my head and I was standing up. The pain then became more of a goosebump-tingling, tickling. The pain was gone. Within less than a second I saw a small black figure leap from within me to the floor. It scurried swiftly into the carpet, too fast for me to identify under which room fixture it took shelter. I had grave doubts that what I saw was what actually happened. The suffering was over! The tingling and rumbling like oceanic sounds of horror were no more. It was a bug! It had to have been.

I reviewed the film. And here it is for your proof and nausea. The small creature that burrowed in my ear was a cockroach with a body just under one inch long, but with antennae and legs, well over one and a half inches. The bright light must have been the cure. Cockroaches hate light and this camera flash must have confused it.

The pain has now completely subsided one hour later. The shiver and goosebumps still linger. I will go to the doctor today to have them confirm that no remnants or eggs have been left over. My ear feels totally normal again, but the thought of eggs or broken antennae pieces brings me no comfort.

Apparently this nightmare is more common than one would think. This Australian man tried extracting his pain by using a vacuum.

This hardy, brown explorer was fast but not fast enough for me to corner it and trap it under a jar. I have not killed it and I feel conflicted in doing so. This piece of unbearable intrusion into my vulnerable orifice of sound gathering saw and heard things only I know and things I could never know. It’s a witness to this morning’s confusion and discomfort. I don’t think it enjoyed it either, so maybe I’ll let it go and it can tell its friends outside. 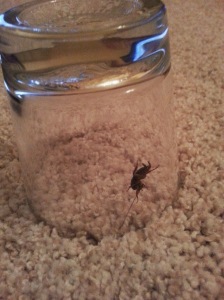 Just got back from an international trip. Still working on prep work for my summer in the Southwest before I start a new career.

Life asks me to not sit down behind this computer, but to make healthy meals and teas for two. The sun begs me to play and my body craves activity. This blogging world is not for me.

Reflection, story-telling, and sharing of experiences still calls. So here I remain, writing to no one.

Travel tips, stories and details of foreign confusion. Information about getting out of sticky situations abroad and food to devour when lost.

Learning how to become a transformational teacher via Teach for America. Summer training will be in Phoenix,  AZ in preparation for secondary math education in a public school on Hawai’i Island.

This blog is meant to serve as a main page to guide you to all of my blogs.

I’ll also write about how I like to write here. This is useful for the extremely interested folk. My writing style is odd at best and I would like to explain myself here.

This is my first time blogging so I would like to blog about blogging.